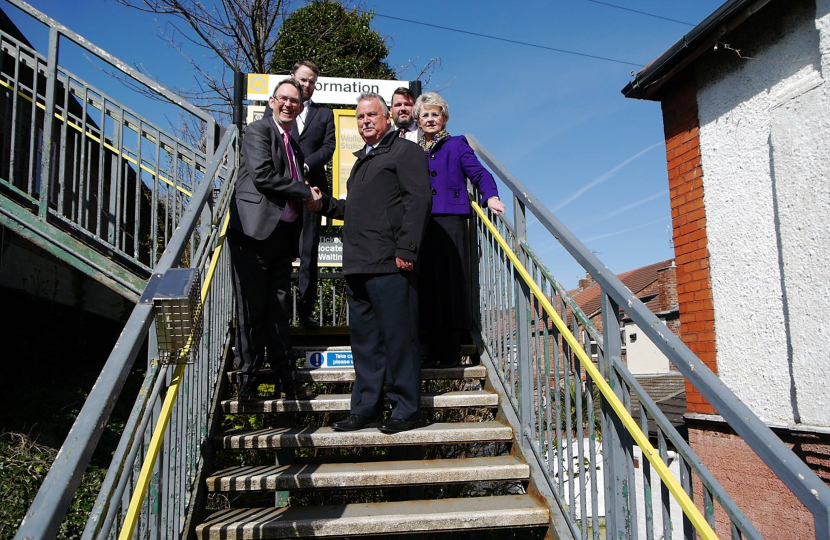 After a six year campaign by councillors Ian Lewis, Lesley Rennie and Paul Hayes, one of the least accessible railway stations in Merseyside is finally being included in a bid by Merseytravel for improvement works.

Wallasey Village Station is accessible only by two flights of stairs, forcing elderly and disabled residents, or parents with prams and buggies to travel to other stations on the network.

In 2017, local councillors invited then Rail Minister, Paul Maynard MP, to see the station for himself.

Following that visit, he urged Merseytravel to apply for a share of the national ‘Access for All’ money for station improvements. Since the fund was launched by the Government, more than 200 stations have been made ‘step free’ – with lifts or ramps.

Now, Merseytravel has agreed that Wallasey Village Station meets the Department for Transport’s Access for All criteria, taking into account a number of factors including proximity to essential services such as large schools, passenger numbers and census data of the local population.

Thank you to Merseytravel for agreeing, at last, to include Wallasey Village station in its bid for a share of the national £300 million fund. The next step is to get the Department for Transport to agree.

Back the bid for lifts at Wallasey Village Station

Photo: in 2017, the then Rail Minister, Paul Maynard MP, was invited by local councillors to see the problems of access at Wallasey Village Station.