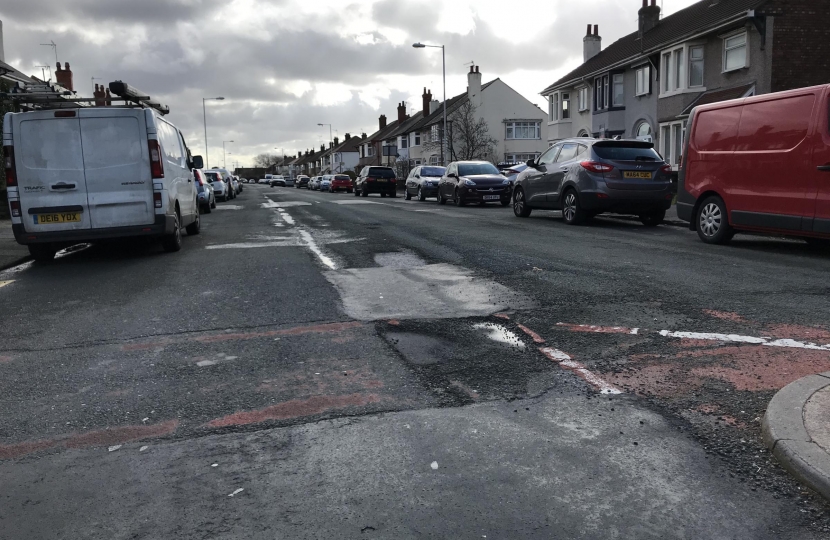 Nationally, £500 million will be given to local councils for additional highways maintenance, with the money expected to fix the equivalent of 10 million potholes across the country.

It is the second instalments from the Government’s £2.5 billion Potholes Fund.

With the average pothole costing around £50 to fill in, the funding will ensure that around 600,000 potholes across Wirral and the rest of Merseyside can be tackled, making thousands of local roads both safer and easier to drive and cycle on.

Councillor Ian Lewis said: “Residents have told us about roads and pavements that are a risk to drivers, cyclists and pedestrians.

“With the money announced this week, we will be asking Wirral Council to make sure a share of this extra cash is used here in Wallasey. Roads such as Leasowe Road, Mockbeggar Drive and part of Seaview Road are in urgent need of attention.”

Details of the 50 roads submitted by Councillors Lewis, Rennie and Hayes are listed here and followed previous campaigns to have Mosslands Drive (see in the picture above) and Hose Side Road resurfaced.

Transport Minister Charlotte Vere said: “We know potholes are more than just a nuisance – they can be dangerous to drivers and cyclists alike, and cause damage to thousands of vehicles every year.

“The funding allocated today will help councils ensure roads in their area are kept up to standard, and that the potholes that blight road users can be dealt with promptly.”

Nominate a road for repair