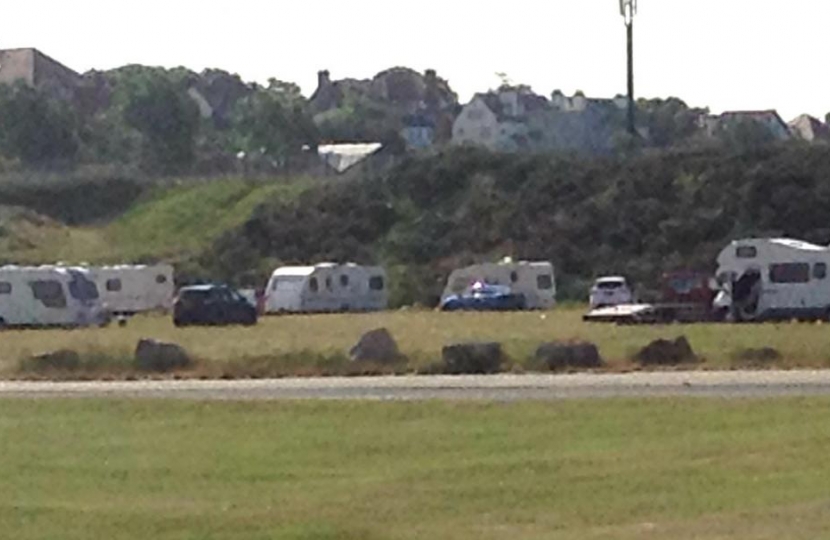 Tough new measures announced by the Home Office to tackle illegal traveller sites have been welcomed by a Wirral Councillor.

The package of measures announced on 7th February, follow concerns from across country that existing powers were not strong enough to tackle the problem and that many local councils were unable to act quickly enough.

Illegal traveller camps were set up in at Upton Meadow in Greasby and The Dips at Wallasey in 2017 and 2018.

Shortly afterwards, the Home Office announced a consultation on how powers could be strengthened.

Now, the Home Office has set out draft measures aimed at making it easier for officers to intervene and remove travellers from land they should not be on and will also consider making it a criminal offence to set up such camps. It is currently defined in law as trespassing, a civil matter.

In addition, the Ministry for Housing, Communities and Local Government (MHCLG) announced it will provide local authorities with practical and financial support to handle unauthorised encampments.

Councillor David Burgess-Joyce has welcomed the proposals: “Communities across Wirral, most recently Greasby and Wallasey, have suffered from the effects of these illegal camps.

“It’s right that the law is changed and that the police, and local councils, are given the powers to end these sites from springing up.”

The Ministry of Housing Communities and Local Government has committed to give councils up to £1.5 million of extra funding to help them enforce planning rules and tackle unauthorised sites, with funding also available under the £9 billion Affordable Homes Programme to help pay for legal pitches.

Additionally, the Home Office will launch a review into whether it should criminalise the act of trespassing when setting up an encampment. A change in the law may allow the police to respond quicker and take tougher action.

The Home Office will also consult on proposals to amend the Criminal Justice and Public Order Act 1994 to:

lower the number of vehicles needed to be involved in an illegal camp before police can act from 6 to 2
give the police powers to direct travellers to sites in neighbouring local authorities. Currently they can only direct trespassers to sites in the same area
allow officers to remove trespassers from camping on or beside a road
increase the time - from 3 months to a year - during which travellers are not allowed to return to a site they have already been removed from